First, a bit of study music!

3. Bone in the skull that separates the nasal cavity from the brain
– Ethmoid 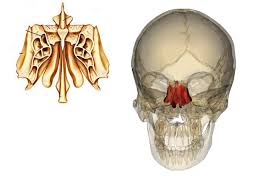 5. Bony elongated path located above the orbit (eye socket) and under the forehead.
– Supra-orbital foramen

6. Bone situated at the base of the skull in front of the temporal and basilar part of the occipital. It somewhat resembles a bat with its wings
– Sphenoid

8. Which bone of the face can take on a honeycomb appearance with an ear infection?
– Mastoid (mastoid process of temporal bone)

9. One of the most important structures in your inner ear is the ____ bone. Although it’s called a bone, the it does not have the typical structure associated with bones in the human body. Rather than being solid and rigid like most bones, it is made out of air sacs and resembles a sponge.
– Mastoid

10. Protrusion from the rest of the skull, like the bumper of a car.
– Zygomatic process 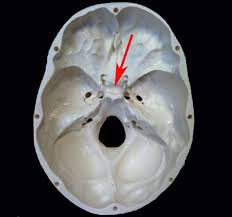 14. Passageway for the facial and vestibulocochlear nerves from the temporal bone to the
middle cranial fossa
– Internal accoustic meatus

16. Ethmoid bone made up of what two structures?
– cribiform plate, crista galli 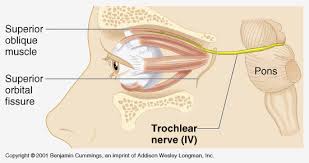 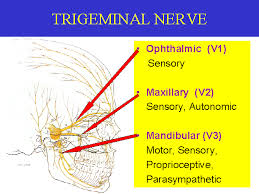 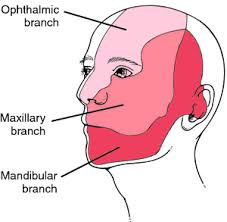 31. Small protrusions of the arachnoid (the thin second layer covering the brain) through the dura mater (the thick outer layer). They protrude into the venous sinuses of the brain, and allow cerebrospinal fluid(CSF) to exit the sub-arachnoid space and enter the blood stream.
– Arachnoid granulations

34. Describe some details about the subarachnoid space
– space between arachnoid and pia mater, contains CSF from ventricular system, cushions brain

35. Subarachnoid cisterns
– occur mainly at the base of the brain, collect large pools of CSF, arachnoid granulations drain the CSF when not properly drained 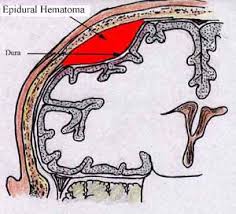 39. What is the largest dural venous sinus, in the sagitttal groove?
– Superior sagittal sinus (also known as the superior longitudinal sinus) The sinus where other veins can drain into. one of the six venous channels in the posterior of the dura mater that drains blood from the brain into the internal jugular vein. It has no valves. The superior sagittal sinus receives the superior cerebral veins, veins from the diploë and near the posterior extremity of the sagittal suture, the anastomosing emissary veins from the pericranium, and the veins from the dura mater. It also anastomoses with veins of the nose, the scalp, and the diploë

NOTE – you would also find an arachnoid granulation in this area 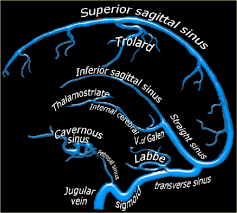 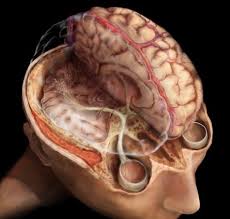 40. Which sinus would you find located below the cheeks, above the teeth and on the sides of the nose?
– maxillary sinus

41. Where is CSF made?
– choroid plexus. There are four choroid plexuses in the brain, one in each of the ventricles.  a plexus in the ventricles of the brain where cerebrospinal fluid (CSF) is produced. The choroid plexus consists of modified ependymal cells. CSF is recycled (flushed) 4 times per day in order to clean out metabolites and toxins like beta amyloid. 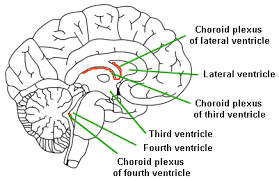 42. The branches of the middle meningeal artery and vein are between which two skull bones?
– Frontal and parietal

43. What are the dural folds? How many are there? Function?
– Internal meningeal layer of the dura which reflects AWAY from the external periosteal layer of the dura to form dural infoldings (reflections), which divide the cranial cavity into compartments and support parts of the brain

44. Venous channels found between layers of dura mater in the brain.[1] They receive blood from internal and external veins of the brain, receive cerebrospinal fluid (CSF) from the subarachnoid space, and ultimately empty into the internal jugular vein.
– Dural venus sinuses (LARGE veins).
– Endothelial lined spaces between the PERIOSTEAL and MENINGEAL layers of the dura.
– They form where dura infoldings attach
– Large veins from the surface of the brain empty into these sinuses
– All blood from the brain ultimately drains through sinuses into the INTERNAL JUGULAR VEINS (IJVs)..
eventually reaching the R. Atrium

45. What type of veins do the dural venous sinuses drain?
– superficial and deep vens of the brain
– sinuses drain to the internal jugular vein via jugular foramen

46. Veins on the superior and lateral surfaces drain where?
– superior sagittal sinus

47. Basal veins run laterally and dorsally around cerebral peduncle to end where?
– Great vein of Galen, which drains to the straight sinus

48. Veins on the posterior and inferior surfaces of the brain, SUPERIOR CEREBELLAR VEINS, and TRANSVERSE SINUSES drain to several sinuses – which ones?
– Straight
– Transverse
– Superior petrosal

49. A large collection of thin-walled veins creating a cavity bordered by the temporal bone of the skull and the sphenoid bone, lateral to the sella turcica is what?
– cavernous sinus

50. What divides the frontal to parietal to temporal lobes?
– Central sulcus 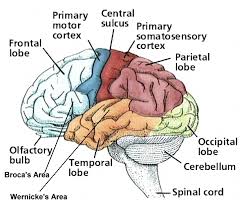 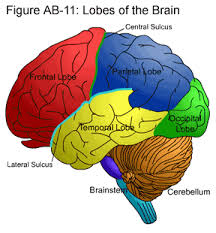 52. Describe the composition of the Diencephalon, and where it is located.
– Epithalamus
– Thalamus
– Hypothalamus
– surrounds the 3rd ventricle of brain
between right and left halves 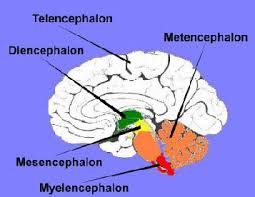 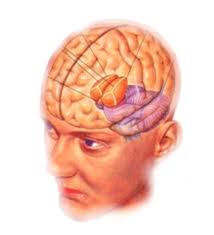 53. Describe the cerebellum and its functions.
– Composed of two lateral hemispheres connected by the VERMIS in the
midline
– Important for maintenance of POSTURE, BALANCE, COORDINATION
– Timing and strength of contraction of muscles
– remember the FALX cerebelli seperates it into rt and left halves 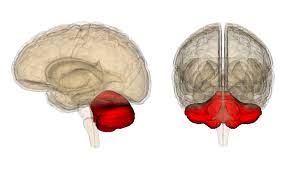 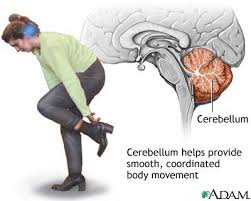 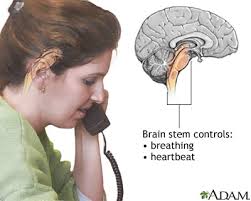 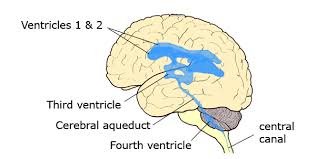 55. The lateral ventricles are separated by what?
– Inter-ventricular foramen

57. What is hydrocephalus?
– overproduction of CSF, obstruction of ts flow, or interference with its absorption. This
results in an excess of CSF in he ventricles and enlargement of the head.
– Ecesss CSF dilates the ventricles, thins the brain, and in infants, SEPARATES the bones of the
CALVARIA because the sutures and fontanels are STILL OPEN.

58. Explain the direction of the INTERNAL and EXTERNAL CAROTID ARTERY
– Internal carotid goes to the brain
– External goes to the face

60. What happens after the bifurcation of the common carotid artery?
– it splits into the internal and external carotids. 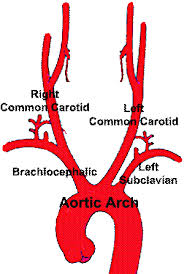 61. What does the vertebral artery stem from? What does it become later?
– right. left subclavian,
– it becomes the basilar artery 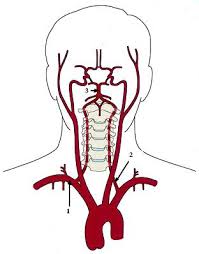 65. Atherosclerosis is most likely to occur in what type of vessels?
– Bifurcating vessels, e.g., common carotid arteries
– example is an older patient who says they feels dizzy – and with an untrasound, might
see stenosis or constriction in this area due to plaques – atherosclerosis

67. Important points regarding vertebral arteries?
– They are the FIRST branches of the subclavian arteries
– Ascend in TRANSVERSE FORAMENA of first 6 cervical vertebrae
– Provide vasuclar supply to cervical spinal cord and neck
– Pierce the dura and enter the cranium via the FORAMEN MAGNUM
– Unite at caudal end of pons to form the BASILAR artery
– provide POSTERIOR circulation of brain

68. If the internal carotid artey is blocked, how can blood get to the brain?
– through collateral vessels
– e.g., with an emboli, a young person may die as the body has not yet formed collateral vessles
where there could be a blood bypass. Older people may actually do better in this case, as their body
is accustomed. Slow atherosclerosis may take 10-20 years to develop.

70. Important thing to notice when looking at circle of willis – MCA
– when looking at the MIDDLE cerebral artery, notice that as you move towards the intenal sectio, it becomes the INTERNAL CAROTID – or from the other side….as it comes from ICA.
– also remeber that the ANTERIOR communicating artery communicates between the anterior cerebral arteries
– also the posterior communication artery can be used as an alternative to the INTERNAL carotid a.

REMEMBER !!!!!! The basilar artery and middle cerebral arteries, supplying the brain, are not
considered part of the circle.

71. What is a cerebral embolism?
– part of a thrombi (blood clot) that breaks off and then travels to the brain to block some part of it – e.g., small artery
– This can lead to a STROKE.

72. Hemorrhagic stroke, what is it? (less common)
– when blood vessel bursts, or bleeds
Hemorrhagic strokes (Bleeds) result from a weakened vessel that ruptures and bleeds into the surrounding brain.

73. Berry aneurysm is what?
– Saccular type of aneurysm, some have it but does not cause problems
– breaking/burst of large blood v. in brain


A saccular aneurysm is the most common type of aneurysm and account for 80% to 90% of all intracranial aneurysms and are the most common cause of nontraumatic subarachnoid hemorrhage (SAH). It is also known as a “berry” aneurysm because of its shape. The berry aneurysm looks like a sac or berry forming at the bifuraction  or the “Y” segment of arteries. It has a neck and stem. These small, berry-like projections occur at arterial bifurcations and branches of the large arteries at the base of the brain, known as the Circle of Willis.

74. Brain aneurysm can result in what?
– ischemic stroke (e.g., as a result of cerebral embolism) 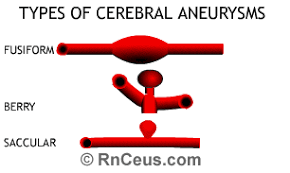 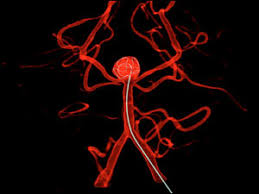 75. Transient ischemic strokes are what?
– mini strokes, a warning of blocked arteries etc.

76. Some points about RUPTURE of saccular aneurisms
– will bleed into subarachnoid space!
– result in a subarachnoid hematoma
– anterior, middle or posterior branching points are possibilities

77. What is a carotid endoderectomy
– Carotid endarterectomy (CEA) is a surgical procedure used to reduce the risk of stroke, by correcting stenosis (narrowing) in the common carotid artery or internal carotid artery. Endarterectomy is the removal of material on the inside (end-) of an artery.

– sometimes best to leave it though! ..as pices can break off – detached embolus!

IMPORTANT POINT!! –
– If an artery is COMPLETELY OCCLUDED, it can REDUCE the risk of stroke, but if there
are symptoms of TIS, maybe put in a stent.

Completing the COW (as safefy vessels) – ANTERIOR  Comm. A, POSTERIOR Comm. A, BASILAR A

a. lies in the hypophyseal fossa of the sphenoid boneb. derives its blood supply from the circle of Willis
c. is entirely ectodermal in origin
d. has independent vascular systems for the anterior and
posterior lobe
e. has neural connections with the pineal body

Given these vessels: 1. basilar artery 2. brachiocephalic artery 3. circle of Willis 4. right subclavian artery 5. right vertebral artery, Choose the arrangement that lists the vessels in order going from the aorta to the brain.

The right and left vertebral arteries eventually converge to form

Which of the following does NOT contribute to the Circle of Willis?

The sigmoid sinus drains into

The posterior cerebral artery is an immediate branch of

A. The posterior communicating artery
B. The internal carotid artery
C. The basilar artery
D. The verebral artery

Which of the following is NOT a part of the posterior system of vessels?

The internal carotid arteries branch off to form

Which of the following is NOT true regarding Berry aneurysms?

A. They have a high mortality rate of around 70-90%
B. Incidence increases with age
C. Once formed, they are likely to rupture, resulting in an ischaemic stroke – When berry aneurysms rupture they do cause stroke, and are haemorrhagic type rather than ischaemic
D. They usually occur in the circle of willis

Which artery provides blood to most of the lateral surface of the cerebral hemispheres?

The subdural space occurs between which two layers?

Which of the following is NOT supplied by the anterior cerebral artery?

A. the arachnoid mater
B. the pia mater
C. the skull
D. the skin

Which two pairs of blood vessels provide the arterial supply to the brain?

A. Anterior communicating
B. Ophthalmic
C. Middle cerebral –  All are technically branches of the internal carotid artery, but the middle cerebral is by far the largest branch and can be considered a continuation
D. Anterior cerebral