In computed tomography (CT), the term artifact is applied to any systematic discrepancy between the CT numbers in the reconstructed image and the true attenuation coefficients of the object. CT images are inherently more prone to artifacts than conventional radiographs because the image is reconstructed from something on the order of a million independent detector measurements. The reconstruction technique assumes that all these measurements are consistent, so any error of measurement will usually reflect itself as an error in the reconstructed image. The types of artifact that can occur are as follows: (a) streaking, which is generally due to an inconsistency in a single measurement; (b) shading, which is due to a group of channels or views deviating gradually from the true measurement; (c) rings, which are due to errors in an individual detector calibration; and (d) distortion, which is due to helical reconstruction.

sarcoma – a malignant tumour of connective or other non-epithelial tissue, kidney nephrosis, obstruction of ureter

nephrosis – kidney disease, especially when characterized by oedema and the loss of protein from the plasma into the urine due to increased glomerular permeability (also called nephrotic syndrome )

A sarcoma (from the Greek σάρξ sarx meaning “flesh”) is a GROWTH that arises from transformed cells of mesenchymal origin. Thus, malignant tumors made of cancellous bone, cartilage, fat, muscle, vascular, or hematopoietic tissues are, by definition, considered sarcomas. This is in contrast to a malignant tumor originating from epithelial cells, which are termed carcinoma. Human sarcomas are quite rare. Common malignancies, such as breast, colon, and lung cancer, are almost always carcinoma.

Above:  43-year-old man with metastatic synovial sarcoma of the abdominal wall. Post-contrast CT shows a nodular, non-homogeneous pattern of enhancement.

Pts are offered surgeries, but the sarcoma comes back FAST (e.g., within a month). Maybe better not to have the surgeries, but it is the pt’s choice.

A thyroid nodule is a lump in your thyroid gland. It can be solid or filled with fluid. You can have a single nodule or a cluster of nodules. Thyroid nodules are common and rarely cancerous. Your thyroid is a small butterfly-shaped gland that is located near your larynx (voice box).

CT scan of thryoid: CT scans are highly sensitive in detecting thyroid nodules. It is more useful to reveal mediastinal extension, retrotraheal extension and retroclavicular extension of the mass. Since the gland contains high iodine content, the brightness of the gland is increased on a CT even without contrast.

4. 57 yo male, embedded teeth (upper), we confirmed it has not entered any of the sinuses (e.g., maxillary sinus), ectopic – could be..

In the case below, it IS in the maxillary sinus:

5. 67 yo male, pleural effusion, atelectasis seen (not from tumor),

atelectasis –
partial collapse or incomplete inflation of the lung

Above: Fractured rib, atelectasis, and pleural effusion can be seen in the CT scan. No pneumothorax is seen in this image, either.

Cardiac tamponade, also known as pericardial tamponade, is a type of pericardial effusion in which fluid, pus, blood, clots, or gas[1] accumulates in the pericardium (the sac in which the heart is enclosed), resulting in slow or rapid compression of the heart. 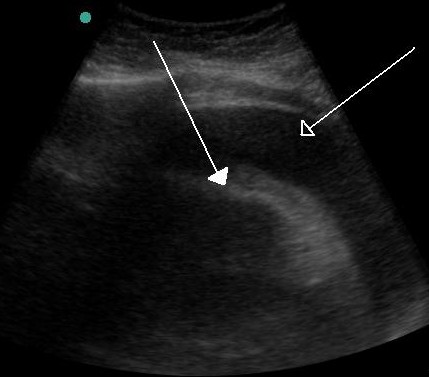 Below: Cardiac Tamponade in a male who complained of shortness of breath, Axial CT shows a large pericardial. Effusion. (Restrepo et al. 2007 ),

7. Acute pancreatitis, look for dilation of the pancreatic duct, may see calcification in pancreas 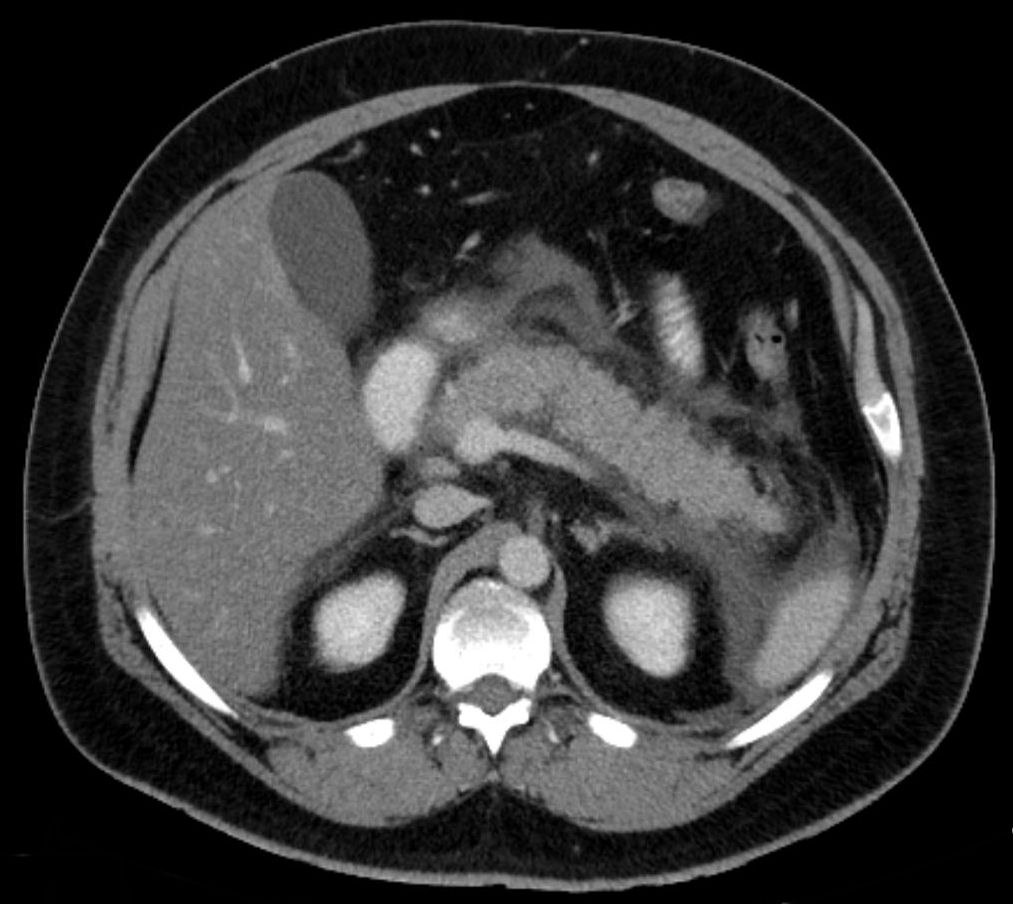 8. 79 yo female, gallbladder cancer, cholecystectomy, noticed scar but no liver metastasis, check for recurrence of tumor

Above: Computed tomography scan in a 65-year-old man. This image depicts squamous cell carcinoma of the gallbladder and invasion of the liver.

9. Cervical lipoma, can present similar to a sarcoma – so need to rule this out, not all lipomas can be resected – so need to check imaging, if liposarcoma = bad, see below

Liposarcoma is a rare growth of connective tissues that resemble fat cells under a microscope. It accounts for up to 18% of all soft tissue sarcomas. Liposarcoma can occur in almost any part of the body, but more than half of liposarcoma cases involve the thigh, and up to a third involve the abdominal cavity.

10. 39 yo male, after renal cancer operation (whole kidney removed), compared with previous study, checked for bone metastasis but it was ok

Below: These are CT scans for two people found to have a left kidney tumor. The patient on the left has a poorly defined mass (radiologists typically describe it as infiltrative) while the one has the right has a well defined solid tumor. The tumor on the left was biopsied and found to be lymphoma. The patient was treated with chemotherapy and did not need surgery. The patient on the right had a robotic-assisted partial nephrectomy and was found to have a clear cell kidney cancer.)

Above: Axial CT scan in a 72-year-old woman with lower gingival cancer in the left molar region shows that cancer involves the infratemporal and temporal portions of masticator space. The tumor extends into the parotid gland (p) and the deep belly of the temporalis muscle (t).

This is not a case I saw, but I found this interesting surgery of resection of temporal bone in Japan –

Giardia lamblia exists in two forms, an active form called a trophozoite, and an inactive form called a cyst. The active trophozoite attaches to the lining of the small intestine with a "sucker" and is responsible for causing the signs and symptoms of giardiasis. #giardia #medschoolradio #microbiology #usmle
%d bloggers like this: