Do Implanted Pacemaker Leads and ICD Leads Cause Metal-Related Artifact in Cardiac PET/CT?

2. 57 yo female, CT angiography, looking at what area of the artery is calcified, she has hemodialysis (chronic renal failure), arteriosclerosis, stenosis of lower limbs, one leg had been amputated, arteriosclerotic infarction, looking at the image – the dark areas are sclerotic and white is calcification, also notce narrowing of the arterial lumen, we noticed more stenosis below the knee, SSD 3D image of the leg + MRP image, when checking for stenosis – check dorsalis pedis, lateral plantar nerve

Below: CT angio image of the legs showing an occlusion or blockage in the left leg (arrow), where blood flow stops.

Below: Lower-extremity CT angiography showed occlusion of the right popliteal artery and the ostial portions of the anterior tibial, posterior tibial, and peroneal arteries

3. 83 yo male, prostate cancer, kidney cysts, atrophic pancreas but there was no mass, carotid artery calcification

The splenic (or left colic) flexure is a sharp bend between the transverse and the descending colon in the left upper quadrant of humans. 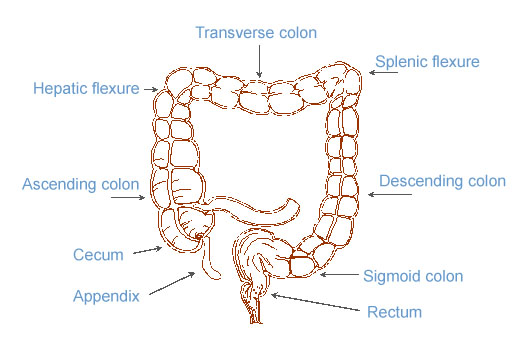 Below: Chronic bronchitis commonly occurs in patients with emphysema and is associated with bronchial wall thickening.

Note bilateral flattening of the diaphragms and significant hyperinflation as demonstrated by visualization of 11 posterior ribs.

7. 89 yo female, total hip/knee arthroplasty (this was before the operation), subcortical cyst, spurs, joint effusion

Bone cysts don’t usually cause any symptoms. They are not cancerous and they do not usually pose a serious threat to health. However, large cysts can cause a bone to weaken, making it more likely to fracture (break). This can cause problems such as pain, swelling, or not being able to move or put weight on a body part.

Pneumonitis (noo-moe-NIE-tis) is a general term that refers to inflammation of lung tissue. Although pneumonia is technically a type of pneumonitis because the infection causes inflammation, most doctors are referring to other causes of lung inflammation when they use the term “pneumonitis.”

Pleurisy, also called pleuritis, is an inflammation of the pleura, which is the moist, double-layered membrane that surrounds the lungs and lines the rib cage. The condition can make breathing extremely painful.

Median sternotomy is a type of surgical procedure in which a vertical inline incision is made along the sternum, after which the sternum itself is divided, or “cracked”.

9. 86 yo male, black stool – tully stool, which is indicative of stomach/gastic hemorrhage, (if it was bight red it is from the colon), rt side pneumonia, lung had honeycomb appearance = fibrosis, interstitial pneumonia

Below: Honeycombing refers to the computed tomographic (CT) manifestation of diffuse pulmonary fibrosis (usual interstitial pneumonia). The Fleischner Society definition is clustered cystic air spaces (between 3-10mm in diameter but occasionally as large as 2.5 cm) which are usually subpleural and basal in distribution. The walls of the cysts are well-defined and often thick (1-3 mm)

Below: (Computed Tomography Angiography): Extravasated contrast in the lumen of the sigmoid colon.