Well-defined bony erosions in the carpal bones and metacarpal bases in a patient with rheumatoid arthritis of the hands.

2. 56 yo male, no other information given, ENT doc referring so we looked at that region, all looked ok, but saw reticular shadow in the chest – but almost normal

A reticulonodular interstitial pattern is produced by either, overlap of reticular shadows, or by the presence of reticular shadowing and pulmonary nodules. While this is a relatively common appearance on a chest radiograph, very few diseases are confirmed to show this pattern pathologically.

Blue toe syndrome, also known as Trash Foot or Purple Toe Syndrome, is caused by a blockage of the small blood vessels in the foot that reduces the flow of blood and oxygen to the tissues.

Pulmonary bullae are focal regions of emphysema with no discenible wall which measure more than 1cm in diameter 1-2.

Below: Apical Bulla in rt lung 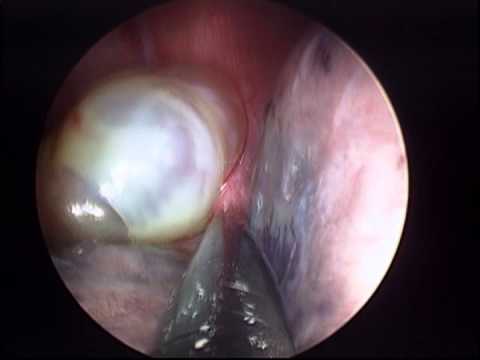 Less than 1cm diameter = normal
If not, check with tomor marker to confirm

6. Emergency case, DWI to Dx acute Brain infarct, high intensity FLAIR, new infarct seen, but suggest due to shrinkage or edema, ON FLAIR: CSF is BLACK, Hemorrhage is white-old infarction (so don’t diagnose it wrong or your pt will get TPA which will cause more hemorrhage!)

8. 44 yo female, myoma in uterus, probably adenomyosis – same spectrum of Dx as with pts with Endometrial cysts – commonly seen (if you see bleeding in the ovary), over menstruation (Menorrhagia)

Adenomyosis (ad-uh-no-my-O-sis) occurs when endometrial tissue, which normally lines the uterus, exists within and grows into the muscular wall of the uterus.

Ankylosing spondylitis is a type of arthritis. It mostly affects the lower part of the spine, and where it joins to the hips, known as the sacroiliac joints. Ankylosing spondylitis can be difficult to diagnose but has a particular pattern of pain symptoms, and changes can be seen on X-ray and MRI. There is no cure, but drugs can help manage the pain and inflammation. Physical therapy can also relieve and prevent some of the effects. #ankylosingspondylitis #spine #medschoolradio #orthopedics
%d bloggers like this: